Is it really true that “no one gets fired for buying AT&T?” 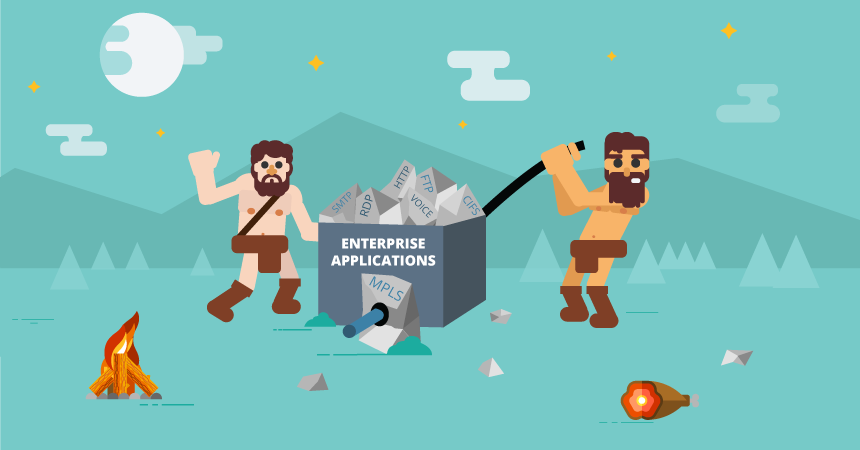 Not for long: a look at the disruptive forces upending the networking status quo – and why you won’t hear about those forces from the incumbent telecom providers:

Collaboration is key to the success of any global business. With the uptick in outsourcing over the past few years, many large and mid-sized companies are setting up shop in such locations as China, India, Brazil, and other remote geographies. It’s a massive opportunity, yet staying connected with these offices is crucial. The internet has enabled businesses to connect with overseas branches, employees, and partners . . . sort of.

If you want to simply stay in touch via email, the public internet will serve you well enough. However, if your business must seamlessly exchange data, voice and video, and mission-critical applications across continents and oceans, using the public internet will hinder business expansion, productivity, and results. Congestion, packet loss, and unpredictable latency undermine its use as a shared medium.

Until recently, the way most businesses sidestepped these problems was through expensive private lines, such as MPLS.

Back in the late 1990s, MPLS was a revolutionary piece of technology. For the first time in networking history, businesses had access to enterprise-grade connectivity between their global offices. They could turn the fax machines off and stop spending so much money on FedEx because they finally had a way to bypass the vagaries of the public internet. But what was revolutionary then is not enough now.

Is it time to move beyond this legacy technology?

MPLS providers, such as AT&T, Verizon, and British Telecomm still serve a $25 billion and growing market today, but businesses are slowly waking up to the fact this legacy technology was not built for our cloud-enabled, mobile, and global age.

MPLS is outdated, expensive, slow to deploy, and unaffordable for smaller companies and even smaller offices within large enterprises. MPLS bandwidth tends to also be prohibitively expensive in remote locations.

Worse than those problems is the outdated business model the MPLS providers try to foist upon enterprises. MPLS requires a subscription to a fixed amount of bandwidth between enterprise locations. Adding additional bandwidth triggers significant overhead, especially if high traffic volumes are rarely observed. Providers can take months to provision additional bandwidth, especially in remote locations. This raises serious concerns with respect to global scalability – which was the point of moving to MPLS in the first place, wasn’t it?

If you expect your MPLS provider to tell you about these problems, don’t hold your breath. It’s in their interest to keep you in the dark and hope that they can keep squeezing outsized profits out of that $25 billion+ market before the bottom drops out.

They don’t want you to know the truth, because the truth will hurt their bottom lines.

The Two Trends that Could Kill Off MPLS

One of the trends that MPLS vendors try to sidestep when selling their services is something that is already undercutting the MPLS market: the cloud.

The mainstreaming of enterprise cloud services and applications – which often runs parallel to another important and related trend: mobility – has already disrupted the networking status quo. Traditional architectures are proving inefficient for the enterprise as the importance of site-to-site traffic is giving way to any-to-any data center, branch, cloud, remote, and distributed collaboration. The cloud is not only here to stay, traffic to and from the cloud over the enterprise WAN now comprises almost 50% of all WAN traffic.

With SaaS adoption reaching near ubiquity, and with tons of vendors offering enterprise cloud-based applications, including CRM, ERP, and BI solutions, network managers are facing a whole new set of challenges.

Since the access medium to all these cloud services is primarily the public internet, application performance takes an obvious hit. And MPLS cannot help.

Yet, many enterprises are stuck. When they sign up for MPLS, they are typically locked into long-term contracts. And when it comes time to renew, many are either unaware of the existence of a better solution, or they are playing it safe with a technology that has been tried and tested for almost two decades now – but whose time is long passed.

And the MPLS vendors are doing their best to breed ignorance and stoke fear. That’s how they keep selling those overpriced services.

“No One Gets Fired for Buying AT&T”

Have you ever had a salesperson tell you that?

There’s certainly some truth to that line. Many CIOs are risk averse and prefer to follow at the back of the pack. But, in doing so, they run the risk of seeing their market shares threatened by more forward-thinking competitors.

What enterprises need to be on the lookout for today is solutions that combine the best aspects of both internet- and MPLS-based connectivity. As regional internet quality and speeds continue to improve, dedicated enterprise-grade private connectivity is really only required over the latency-ridden middle mile today. You won’t hear that from MPLS providers, but that is the new, less-expensive status quo.

What cloud-enabled, global businesses need and want is infrastructure suited to today’s challenges. And that infrastructure is Aryaka’s managed SD-WAN.

Aryaka’s managed SD-WAN is the only purpose-built, global private network with built-in WAN Optimization and SD-WAN that can be delivered as a service. We take care of the middle mile by abstracting the network and delivering it via 28 points of presence located within 30 ms of 95% of the world’s business users, so we can keep latency at a minimum and take care of deployment and scaling in a matter of days, if not hours.

No one gets fired for buying AT&T, but you may lose out on the benefits of consuming, as opposed to constructing your network. By removing the need to constantly be monitoring and maintaining your network (and answering the support tickets for poor performance and network downtime), you and your team could be focusing on improving your enterprise’s IT in other ways.

“Over the years, the technology has evolved, and as new ideas and solutions are released, the ability to connect has become somewhat easier and much more reliable than in the past. Instead of just myself (or my team) making sure that the VPNs or point-to-point circuits are up, I work with Aryaka to verify the routes past my LAN are correct and working. My time is now spent refining and optimizing my network to work best with Aryaka.”

Even CIO Kenny Gilbert of Invensense mentions the benefits of moving from MPLS to Aryaka for his team:

“In our world, we get no lead time, and with MPLS, often you need many months. I have also seen at the last three companies that I have been at that had acceleration hardware that was not working. This was from either lack of maintenance or misconfiguration. In all three cases, the teams were spread so thin that they never got to testing and really verifying the speeds. I have found you have to always be testing and adjusting to have peak performance, and with Aryaka that comes with the service.”

He also includes that having in-depth knowledge of reporting and results helps from the perspective of keeping IT’s seat at the table:

“For me, as the CIO I think it is a great talking point coming into any other job as I can tell the CEO or CFO about the ways to increase speed and save money while keeping reliable services running.”

So the next time an MPLS salesperson says, “No one gets fired for buying AT&T” (or Verizon or BT, or whichever monopoly telecom provider is putting the squeeze on you), you should probably reply, “Well, maybe they should!”

To learn more about Aryaka SmartCONNECT, contact us today or start your free trial.