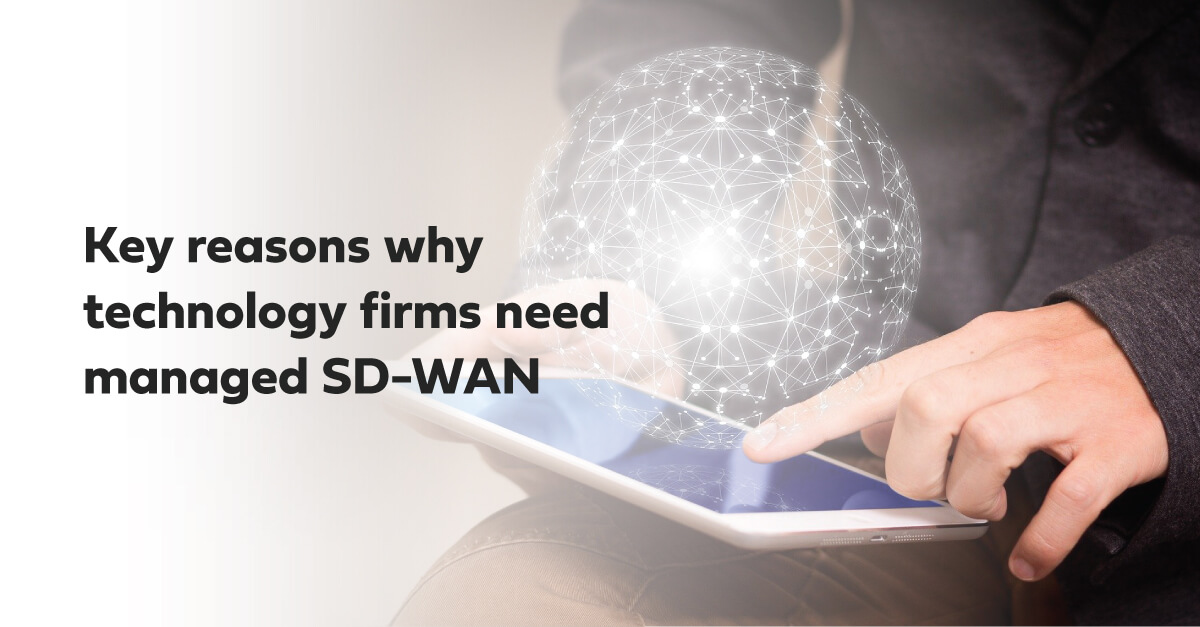 John Doe is a senior leader with a leading US-based technology firm. His day usually begins at 7 am, the perfect time to hop on a video conference call with the marketing team in Singapore, followed by a feature prioritization meeting with the development team in India. Ever since his company cut back on international travel, he has come to rely on these daily calls to manage his international team. Virtual meetings like this have been a mixed bag for John. Without a hectic travel schedule, he now spends quality time with his family, but he is often frustrated with the quality of these virtual meetings thanks to the frequent disconnections and bad voice/video quality.

Calls with his sales and marketing teams are frequent but brief. In contrast, interactions with the R&D teams tend to be more long-drawn and usually involve PowerPoint presentations, whiteboarding and shared excel sheets. Constant interruptions from participants being disconnected and reconnecting disrupt the flow of his meetings. These are minor irritants when compared to the problems faced by his team when accessing applications hosted on Virtual desktop environments like Citrix. These applications are susceptible to latency. It is difficult for his team to be productive when they are forced to wait for a few seconds after every mouse click. Even upgrading the broadband internet connection didn’t seem to fix the problem. Moving the server closer to the team was considered but dropped after the client insisted on hosting the server at their premise for security reasons.

It took months of painstaking effort on John’s part for the folks in the development team to become friends with the people over at the operations camp. His operations team often complained about the quality of software pushed for live deployments. The development team insisted that their software was bug-free and worked just fine in the test environment. The problem was only solved when a new DevOps process was rolled out. Thanks to his efforts, the Dev and Ops teams were finally on the same page, but the NetOps teams were still a drag. It took them months to configure the network. Reconfiguring routers often required them to visit sites and downtime was inevitable.

These problems were minuscule when compared to his issues with the factory in China. There were days when the entire manufacturing ground to a halt because the transfer of design file and other manufacturing execution software data took hours instead of minutes.

Managed SD-WAN! The Panacea for All Ills – Truly!

Challenges like these are commonplace in the technology sector. Tech firms operate in a very international environment with customers across the world, development teams in India and factories in China and Taiwan. Data traffic between these international locations was always high, but now with increasing adoption of cloud applications and big data systems, the data tsunami has now hit the enterprise WAN. In the past, IT organisations solved this problem by simply adding more bandwidth to the existing MPLS links between the branch offices and HQ. With the exploding traffic, this has become a costly proposition. The problem is further compounded when the non-critical traffic is forced to travel to the HQ before exiting to the Internet. A fully managed on-demand SD-WAN solves many of these challenges.

Unfortunately, Interruptions in real-time voice and video applications are common place. Most of these problems arise because of latency issues and breaks in first-mile connectivity and latency in the middle-mile. UCaaS reliance on the public Internet can also be problematic.

The following is an example of how Aryaka’s managed SD-WAN as a service can address the UCaaS challenge. We partnered with 8×8 Cloud Communications to deliver a truly differentiated UCaaS experience.

The partnership combines 8×8’s Cloud Communications UCaaS offering with Aryaka’s Global SD-WAN, providing the best of both worlds. All of the voice, video and data tools bundled into 8×8’s UCaaS platform ride Aryaka’s global private network instead of getting shunted off to the best-effort public Internet. Voice, video and data are optimized for global transport and user experiences rival those of domestic, regional connections.

Aryaka’s solution is built for a cloud-first world. The solution comes with built-in WAN optimization, security and application acceleration. Aryaka provides direct connectivity to Azure, AWS and Oracle for applications hosted on these IaaS platforms. 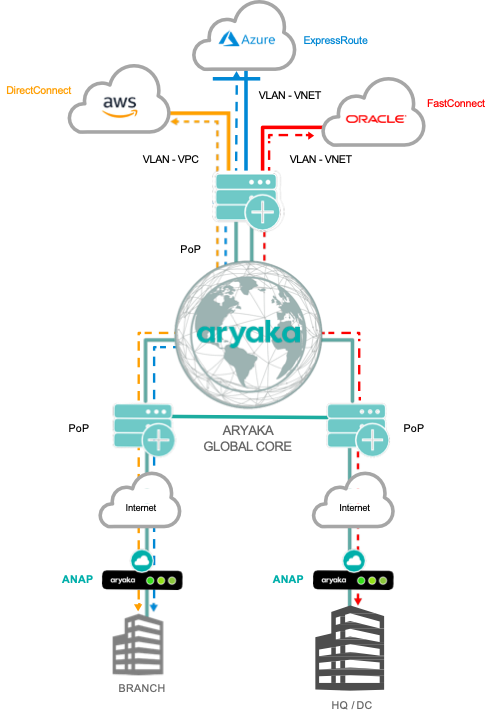 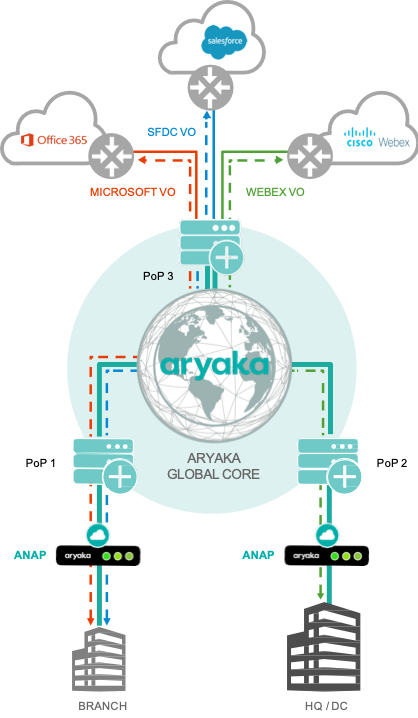 For other SaaS deployments, a Virtual Office is the preferred solution. A ‘Public Virtual Office’ (VO) is Aryaka’s solution for providing connectivity and improving the performance of cloud-based office applications that are accessed over the internet. A VO is an Aryaka virtual router with Layer 4 stateful firewall capability and uses a public IP address. It also provides an optimization container and multi-segment TCP architecture to reduce the RTT.

Aryaka provides technology forms a perfect solution for connectivity to Citrix or VMWare environments. Aryaka’s solution overcomes the issue of latency by operating its own fully meshed Layer 2 global core network with 30+ Points of Presence (PoPs) around the world. Aryaka understands the security concerns of tech clients; accordingly, our solution does not require the installation of any CPE at the client premises.

Figure 2: Aryaka connectivity between ITSPs and their Clients.

Figure 2 is a representation of connectivity between the offshore center/branch and HQ. In the first mile, the branch office is connected to the closest Aryaka PoP over an Internet IPsec link. The longest path, i.e. the middle-mile, is over Aryaka’s private core network. The last-mile is IPsec connectivity to HQ from the nearest Aryaka PoP.

Aryaka’s SD-WAN as-a-Service delivers SaaS acceleration through a private, software-defined Layer 2 network. Through the strategic distribution of PoPs, our private network is within 1-5 milliseconds from major business centers around the world.

Aryaka’s proprietary and patented optimization stack is baked into our fully meshed private global network, freeing businesses from the hassles of maintaining and managing appliances, while providing optimized performance.

In an international enterprise WAN connectivity, the middle-mile is the longest path and hence responsible for most of the connectivity problems. Aryaka effectively solves this problem by deploying a fully meshed private Layer 2 network for the middle mile.

The word ‘DevOps’ is a combination of two words, ‘development’ and ‘operations.’ DevOps is a system that encourages collaboration between development and operations teams to deploy code to production environments faster and in an automated way. DevOps is key to faster product launch; it allows agile development teams to implement continuous integration and continuous delivery.

As more organizations adopt DevOps processes, it is becoming clear that network operations, a vital part of the puzzle, is outside the DevOps process. Network engineers are under extreme pressure to provide services on-demand much like the operations team. Waiting for a month for a new VLAN is no longer an option when the development team needs it now. Networks designed based on legacy MPLS systems are inflexible and difficult to configure.

What is required is a WAN architecture that is software-defined easy to operate and configure. It must also include a management and orchestration portal that allows for centralised monitoring and reporting.

Aryaka’s fully managed SD-WAN with centralised monitoring and orchestration helps bridge this gap between DevOps and NetOps. The ability to provision and make changes to the network from a centralized application dramatically speeds up the network rollout time. 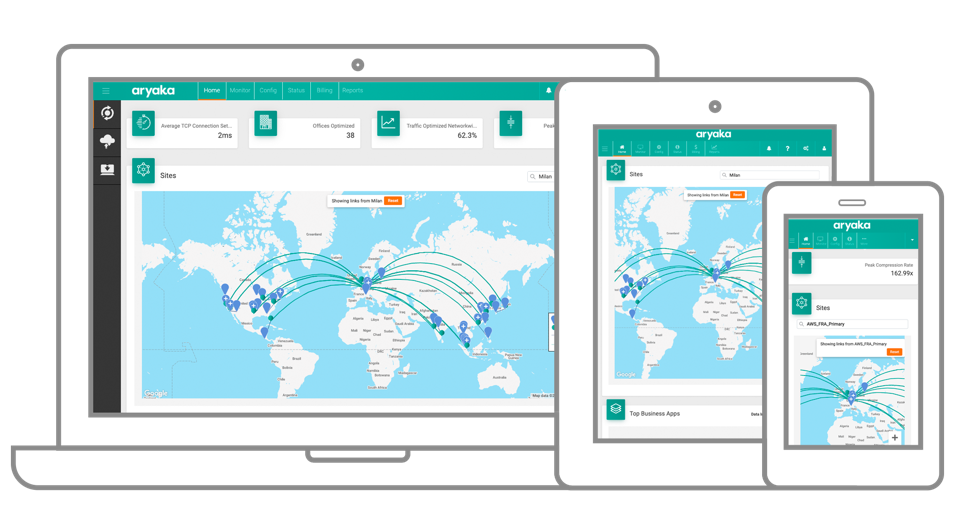 MyAryaka is Aryaka’s cloud-based orchestration and visibility portal that gives customers the ability to configure, control and manage Aryaka’s SD-WAN. Ensuring networks are set up, configured and remain optimized at scale in an increasingly distributed IT environment is paramount for any enterprise.

MyAryaka portal also offers deep, end-to-end network and application visibility for your business, and provides APIs for graph data as well as an option to embed URLs which can be used to integrate to customer’s existing visibility tools. 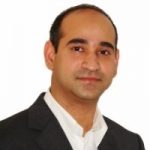 Arun Natarajan
Arun is a Director of Product Marketing at Aryaka. He brings over 18 years of experience in marketing hi-tech products and services. He holds an MBA from London Business School and a technical degree from Bangalore University.
Previous Post
Next Post