Network Slowdown of “Olympic” Proportions: Could the Winter Games be choking your enterprise applications globally? 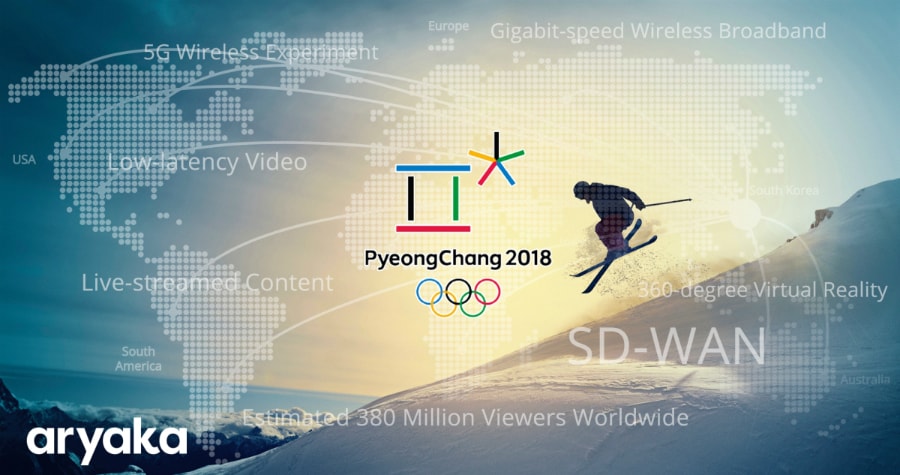 The 2018 Winter Olympics in PyeongChang, South Korea, promises to be the most technologically advanced games yet, with more ways for you to stream unique, high definition content from more events to wherever you happen to be in the world.

Although 5G technology is not expected to be commercially available before 2020, South Korea service provider KT, the country’s largest wireline provider and second largest wireless carrier, teamed with Intel to deliver a 5G trial environment.

According to an editorial by Sandra Rivera, senior VP of Intel’s Network Platforms Group, visitors lucky enough to be attending the event will be immersed in a 5G wireless experiment featuring “access to wireless broadband at gigabit speeds, ultra-low latency video distribution and livestreamed immersive content.” Even those of us taking in the events from afar – an estimated 380 million viewers worldwide – will benefit from the local 5G test.

The Impact of Home and Office Viewing

The advanced viewing experiences will likely result in more people streaming more Olympic events than ever. And the bar was already high to begin with: At the Rio 2016 Olympics USA Today reported that NBC had 13.4 million unique live-stream visitors on the first Monday of the ceremonies.

The crushing demand on the Internet will result in network congestion, unreliable connections and even network outages, all of which will translate into spotty application performance and unhappy users. This will be especially true for global companies that have augmented their MPLS networks by installing edge-based SD-WANs that rely on the public Internet for transport to business-critical cloud and SaaS applications.

The State of Internet-Based Connectivity

The Internet Service Providers (ISPs) that manage and develop the public Internet are actively working to improve the quality and scale of their networks. However, according to an analysis of the connectivity to and from thousands of locations around the world, these infrastructure investments are moot because the networks are not able to perform when facing true enterprise-level connectivity demands, especially over long distances on a global scale.

The international middle mile remains unreliable and is riddled with latency, packet loss and jitter. While it takes a 100KB file 200 milliseconds to travel from San Jose to Chicago over the public Internet, it takes the same file 4,000 milliseconds (on average!) to travel from San Jose to Shanghai. The variation in application response times can be extremely high as well (more than 200% in some cases). To put this in perspective that is roughly 4x slower than the average response time on a private network.

There are two basic types of SD-WANs:

SD-WAN enables you to scale bandwidth more economically and deploy locations in days and make changes in minutes, but if your SD-WAN uses the public Internet, be on the lookout for performance degradation when the Winter Olympics kick into gear.

However, if your SD-WAN is supported by a global private network with built in WAN optimization, your critical enterprise traffic won’t start to choke when millions of viewers log in to see a popular skating event.

So Which SD-WAN Will Win Gold?

Events like the Olympics can create network problems for enterprises, but they don’t have to. Being proactive is always key. A global SD-WAN delivered as a service over a private network can help you address the application performance problems that stem from network congestion by bypassing the unreliable public Internet. With the right SD-WAN solution in place, even when the Internet explodes with Olympics fervor, your office workers won’t see their mission-critical applications start to spasmodically hiccup.

If you’re tuning in to the Winter Olympics, make sure your network is ready. You do not want to miss out on all the action.

To find out more about which SD-WAN is right for your global enterprise, download The State of SD-WAN Connectivity report.

Injoon Song
Injoon Song is the Senior Solution Architect for Aryaka Networks and is a digital transformation evangelist for SD-WAN based solutions. He has over 15 years’ experience in IT and Systems support with some of the leading global networking solutions in the industry today.
Previous Post
Next Post