The Difference between SD-WAN and CDN 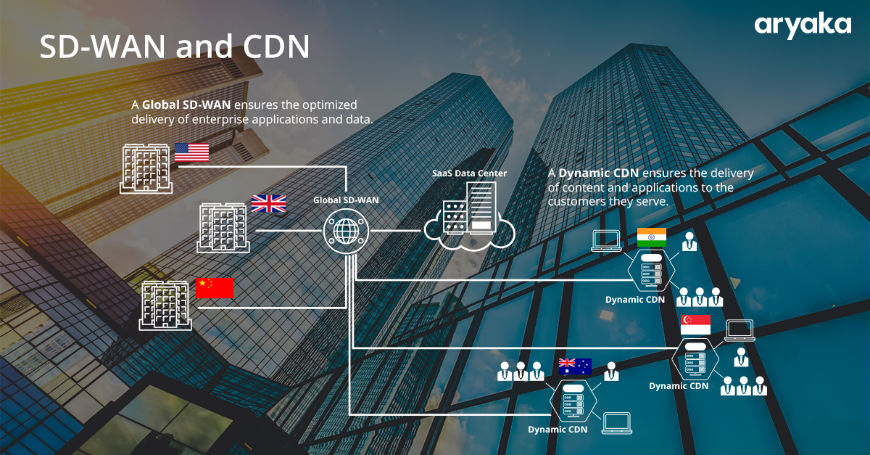 Sometimes there is confusion between what a Software Defined-WAN (SD-WAN) does and what a Content Distribution Network (CDN) can do.  After all, both are used to speed up the performance of applications, but for two different areas.

That’s a good starting point, but there are some overlapping use cases that can muddy the picture, as we’ll see.

A typical SD-WAN customer may have a data center in Santa Clara and users throughout the US, Europe and the Middle East.  They would have brought in SD-WAN when it became too expensive to scale MPLS for exploding bandwidth needs, or when the company couldn’t afford the long lead times required to make network changes.

A business could deploy and SD-WAN in days for global connectivity. However, some SD-WAN products rely on the best effort, public Internet for long-haul connectivity, which negatively impacts mission-critical application performance when used as a transport. Private network-based SD-WAN, such as services provide by Aryaka, optimize and route traffic over a dedicated and secure WAN backbone. This results in faster and more consistent application response times for end users no matter where they are located around the globe.

The role of CDNs

CDNs, on the other hand, are typically used to stage content closer to their consumers. A news organization, for example, might worry that a large news event would swamp centralized web servers.  Signing up for a CDN would enable it to replicate and cache its content on servers around the world.  Now when news breaks, visitors would be served from local servers and there is little chance service would be delayed or interrupted.

Some Software as a Service companies also use CDNs to stage content closer to customers in an effort to bolster the performance of their network-based services, and that’s an instance where SD-WANs can come into play as well.

Just because a SaaS company uses a CDN, doesn’t mean the performance of that SaaS service will be adequate for all customers.  After all, customers come in all shapes and sizes and can be located anywhere, and the CDN in question will only provide the needed performance boost for some percentage of the SaaS customer base.

Given that, some customers may opt to use an SD-WAN service to make sure employees are getting the best possible experience out of the SaaS offering.  Traffic from remote branches rides Aryaka’s global, private SD-WAN and is pumped right into the SaaS data center.

For example, City & Guilds Group, the $195 million global leader in skills development offering everything from eLearning to executive coaching, deployed Aryaka’s Global SD-WAN to tie users in the UK, India, New Zealand and the Americas to the organization’s instance of Office 365 hosted in Microsoft’s data center in Dublin, Ireland.

Using an SD-WAN also ensures enterprises can optimize the performance of all their SaaS tools, instead of having to tackle SaaS performance issues application by application.  That’s a huge time saver because, by some counts, companies use an average of 16 SaaS apps today and that number is climbing rapidly.

Since the roles of SD-WANs and CDNs are rather distinct, it wouldn’t be surprising to find companies that use both.  That news organization that uses a CDN to stage content around the world, might also decide to use a SD-WAN to rapidly scale the bandwidth of its WAN backbone while optimizing the performance of applications accessed by employees over that network.

In fact, Aryaka offers both SD-WAN and CDN services.  However, unlike the classic CDN networks focused on content caching, Aryaka’s CDN is used by application providers to support dynamic content that is transactional in nature, requiring a lot of interaction between the user, the server, and the application.  In these cases, there is very little to cache, so the performance of the network is key.  Aryaka’s optimized, secured, managed backbone delivers.

Air China partnered with Aryaka to leverage our global SD-WAN and boost the performance of the company’s web portals and website. When they made the switch to Aryaka’s Global SD-WAN and CDN services, the airline saw cache hit rates improve more than 99 percent and loading times reduce considerably. This greatly improved the airline’s web experience for customers around the world.

So while both SD-WANs and CDNs help speed the delivery of applications, they both play a critical role in helping enterprises get the most out of their online resources. We invite you to learn more about our Global SD-WAN and CDN services. Contact Aryaka today to schedule a meeting with one of our expert consultants.