No, this isn’t a medical interest piece. Far from it. However, there may be something to be said about the Internet today as it needs a reality check (up).

LIS is a particularly dangerous syndrome affecting enterprises. There was a time when Internet speeds were measured in kilobits per second with 28.8 dial up modems. Downloading movies was unimaginable, and even the smallest document caused a chokepoint. Fast forward to today, when broadband speeds in excess measured in Gbps are not unheard of, in some parts of the world. Internet access speeds and fiber to the home can easily lull enterprises into a false sense of security, encouraging the expanded usage of public Internet infrastructure to drive global enterprise WANs.

But reality hits hard in such cases, especially when these enterprises have branch offices within emerging economies like India, China and Brazil. This is not uncommon in manufacturing, logistics, computer software and business services verticals where outsourcing to low cost destinations is a business imperative. Inherent faults with the use of Internet connectivity, such as peering points and their impact on latency levels, high packet loss and connection drops can make working over the Internet across long distances a nightmare in these locations. Packet loss, especially, can be debilitating for a network as it kills throughput. A quick look at the charts below will tell you just how much –

At a packet loss level of 1% (quite commonplace in India), a 45Mbps circuit operates at a mere 2.3 Mbps – a fall of nearly 95% with 50ms of latency- that could mean India to SIngapore! And this number gets much worse over a 200ms latency connection – dropping to 600 kbps throughput- the impact of going from India to Europe or Australia.

Take these numbers to your networking team and they’ll tell you what this means for application performance – no wonder your employee productivity has been compromised!

Which is why we have worked to solve the problem with Aryaka.

With Aryaka, you can have the best of both worlds- first and last mile Internet- giving you tremendous agility and cost advantages; combined with an optimized, stable connection over a private core network for the middle mile. The Aryaka solution utilizes one or more Internet or direct lines to our nearest POP (Point of Presence) from the customer site, from the origin POP over the Aryaka private core network to the destination POP, which in turn connects to your remote office located in a distant region. Over the core network, your data will experience zero packet loss and a steady latency, providing a superior experience and pushing your network utilization to hitherto unheard of levels. And the short hop on the last mile will likely be similar in performance to a private link if the edge providers are dependable within the region.

Aryaka’s intelligent core network brings TCP Optimization, compression, QoS policies and several other features that keep the effects of latency and packet loss away from your WAN; over the last mile as well, Aryaka’s ANAP device can help to mitigate the effects of latency, changing an unreliable connection to a stable, dependable one for all kinds of traffic including voice and video. Over Aryaka, application performance improvement levels can reach factors of over 100x. Go ahead, get cured. Treat your Lossy Internet Syndrome with Aryaka. 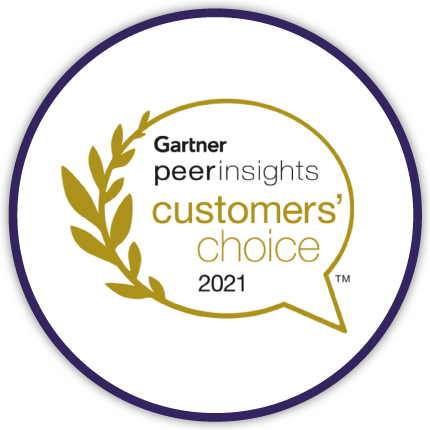 Aryaka is recognized in the

WAN Edge Infrastructure for the Second Year in a row!